Meeting the Man with Malice Towards One and All

Admittedly, there isn't any Indian over the age of ten who doesn't know Khushwant Singh; know him in one of his various avatars: the Sardar in the lightbulb, the writer behind the slim seminal defining work on Partition, the editor behind Illustrated Weekly, the columnist whose trenchant wit was evident weekly, the self-anointed dirty old man of journalism...

Similarly, I have known him since the age of seven or eight when my father started passing on the newspaper to me with the instruction that I read his column, it would improve my English. Same with the Illustrated Weekly of India - that cheeky, salty newsmagazine with its defining cartoons that was helmed by Khushwant Singh for several years - the reading of which was prescribed to hone English language skills. Over the years I was to discover his other avatars...

I came late to 'Train to Pakistan' - the historical novel published in 1956 which tells the monumental story of India's division through the lives of residents of Mano Majra, a village located on the border between India and Pakistan - during a career sabbatical in early 2001. It taught me more about the partition of the subcontinent than my cumulative history lessons. Serendipitiously, I had just started to write , and having grown up in a border town which was labelled a "militant hot bed" by the media during the Khalistan movement, at that time was struggling with a story around the Khalistan movement. Suffice to say that Mr Singh's novel unlocked my creative juices and pointed me in a direction which was to take me seven years before the first fictional examination of the 20th century history of Punjab, The Long Walk Home, was published.

The narrative arc of The Long Walk Home starts pre-Partition and comes all the way to the present. The research took me deep into an understanding of the Sikh faith, its origin and growth, where his 'A History of the Sikhs' was my veritable Bible.

Upon the book's publication in July 2009, I was very keen to meet with Khushwant Singh and my editor tried to arrange a meeting. However, during the Delhi launch Mr Singh was off to Simla for his summer retreat. I rued that missed opportunity to meet the man who had strongly influenced my writing. Imagine my surprise, therefore, when a week later, he reviewed the book in his weekly column and gave his nod of approval! I remember telling my husband that after Mr Singh's review, none other really mattered.

Come 2012 and my third novel, The Taj Conspiracy, was released in June. The book's cover carries a blurb from Khushwant Singh: a gifted writer of great promise. The Delhi launch was scheduled for 7 June. Once again, I was seeking an opportunity to connect with him, if possible, for Mr Singh, at 98 years, has practically retired from public life though he continues to write daily and his weekly column is syndicated across several Indian newspapers. 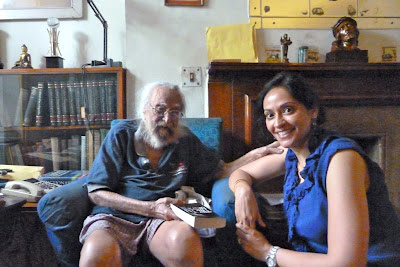 My Publisher was trying to arrange a meeting and I was checking my inbox till the moment the flight took off, but no luck. In Delhi the next morning as I checked my mail I discovered I was finally getting lucky. Apparently, a very resourceful person at my Publisher's had sent across to Mr Singh copies of The Long Walk Home and The Taj Conspiracy along with a print -out of his review of the former and he had granted me a half hour window, 4-4.30 pm.

The day passed in some kind of surreal haze as I met retailers and booksellers before heading to Sujan Singh Park, the residential complex built by Khushwant Singh's father, where he lives. As I entered his living area, a high-ceilinged cavernous room lined with books, I sighted him in one corner, grey and hoary in his armchair from which he watched us approach.

As I wished him Sat Sri Akal, the traditional Sikh greeting, and introduced myself, he replied, "Tusee Guru-ans hoye" - Guru-ans are descendants of the Sikh Gurus and my father's family traces their lineage back to the 3rd Sikh Guru.

Thereafter, we conversed for a half hour, in a mix of Punjabi and English, and few conversations before this have packed so much in such little time. We discussed Ghalib, jointly recited Bulleh Shah, chatted about the '62 Indo-China war, Hong Kong people and HK cuisine, family, memory, Sikh Gurus, sohni kudis and old men! 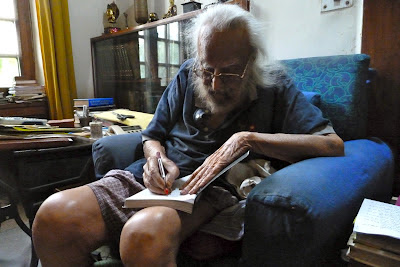 When it was time to take leave I requested him to sign my copy of The Taj Conspiracy. Sign it he did, with the Sikh blessing: charhadi kala vich raho. Have a buoyant spirit!

Sir, if I have an ounce of your erudition, wisdom or wit when I am 98, I'd have lived well. Besides all that we talked, the grace notes of that mellow afternoon in your study will always stay with me. To THE Sardar!

Posted by Manreet Sodhi Someshwar at 13:23