On the 39th death anniversary of Shiv Kumar Batalvi, am sharing an earlier post.

It was Amrita Pritam who coined that particular epithet for Shiv Kumar Batalvi. Birha is a Punjabi word that connotes the grief of separation from a beloved, and it was Baba Farid who declared birha a crowning emotion with his verse, birha, birha aakhiye, birha toon sultan.

Batalvi, widely regarded as a peerless modern Punjabi poet, trawled through the landscape of romance and its adscititious angst, his lyrical verse exploring unrequited love, premonitions of death, and the inviolable bond between an artist and his creativity. Such is his oeuvre that growing up in Punjab, it is common to confuse his verses with folk songs – such is their popularity with the masses. Thus along with lathe di chaadar, and jugni, and Heer, I heard maye ni maye and got introduced to Batalvi, subliminally, which is the gift of culture. It was only in my teens that I became aware that there were actual poets, with specific names and bios, behind the songs that I took for granted and hummed and heard being hummed around me all the time. The de rigueur rendition of Heer at weddings was copyright a certain Waris Shah, aka the Shakespeare of Punjabi! During my teenage years, confounded by hormones and the separatist movement of Khalistan, I debated with my extended family on questions of identity and often, the discussion was rounded off with a final quip ‘Bullah ki jaana main kaun’ This Bullah, I discovered, was Baba Bullah Shah, a revered 18th-century Sufi poet whose humanist verses are woven into the fabric of Punjabi. It was inevitable then that I would eventually discover Batalvi.

My mother, practical and no-nonsense at best of times, was dreamy-eyed when she first told me about the poet behind the familiar maye ni maye main ik shikra yaar banaya. He was the Byron of Punjab, she said, on what sounded suspiciously like a sigh, and I understood. Like a typical convent-school child I was familiar with the poetry and romance around George Gordon Lord Byron, the handsome poet with a limp and a penchant for romantic poetry, who allegedly left women swooning behind curtained windows when they glimpsed him walking down the street. Unh-hunh! a Punjabi Byron, I thought, what a poser. But I was young and had much to learn. 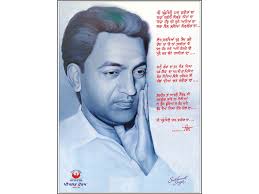 When I started exploring the ‘myth’ of this Punjabi Byron – for what else could it be, thought my cocky/read ignorant/ self – I came across comparisons with Keats as well. Shiv Kumar Batalvi was widely viewed through the prism of English romantic poets by people educated in English; for the semi-literate average Punjabi he was the empathetic poet who spoke to them directly with his down-to-earth metaphors, his soaring lyricism and his aching poignancy.

Batalvi was born in 1936 in West Punjab and his family moved to Indian Punjab after partition. That severing of the state into half was not the final tribulation for Punjab, which was to go through further subdivisions on the basis of language. In the fifties and sixties, the linguistic basis used for the division of India’s states was employed by the political parties in Punjab to further their respective agendas. In the ensuing imbroglio between the Akalis and Jan Sangh, Punjabi was hijacked as a language of the Sikhs, and consequently not of Punjabi Hindus who took to aligning with Hindi. In such an environment, Batalvi, a Punjabi Hindu, wrote poetry in his mother tongue Punjabi. Aided by his handsome looks, and his powerful voice, he recited his verses to packed audiences in Kavi Darbars across the states. He touched a chord with people and his popularity boomed. He gave the state back its language, free of the burden of caste or class. It was a parallel with his own life where he had been unable to marry the woman he loved because of caste and class differences. All that angst went into his poetry and no wonder the common Punjabi responded to it with a deep sense of empathy.

Batalvi himself was not very well-educated. He flitted across several educational institutions before settling down to work as a Patwari, a job that his frustrated father had arranged for him. The work of a land-record clerk had him visiting fields and farms. This kept him in close contact with the flora and fauna of Punjab and the illiterate peasantry of the countryside, and provided him with the visual imagery and earthy metaphors that propelled his haunting lyrics.

As I discovered, in the case of Shiv Kumar Batalvi, the myth was reality, phoenix-like. The man was seen as a modern-day Ranjha, the fabled lovelorn hero of Punjabi poetic legend, who sang his own compositions. He published his first collection of poetry at the age of 24, is the youngest writer to be feted with India’s highest literary award, the Sahitya Akademy, at the age of 28, became a legend in his lifetime, and was dead at the age of 35.

Personally, I re-discovered Batalvi in the mid-nineties when I was working in Mumbai. The physical distance from home, the palpable ache that came from not witnessing green fields, the bland spinach disguised as saag served in restaurants, made me yearn for home. It was then that I chanced upon Jagjit Singh’s rendition of ‘Birha the Sultan’. Hearing Batalvi transported me. I did not understand the lyrics completely but it was okay, I was in my comfort zone.

The remarkable thing about any great piece of art is that it reveals itself progressively. Which means that it is possible to discover new facets of the same composition/article/sculpture years onward. It happened with me when I started to write myself. I had never envisaged a writing career, and the thought that I would one day write a historical novel that would deal with the 20th century history of Punjab was a definite mirage. And yet, I did. I spent hours poring over history books and fiction and listening to interviews and talking to people who had been witness to that history to write my book. Writing found me, it led me to that particular project and I followed. And it was during that phase that I connected with Batalvi again.

In his poem, Eh mera geet kise na gaana, Batalvi talks about the bond between the artiste and his art, the gift and gift’s burden, one that is forged from beyond the time of birth. And consequently, the extent to which the link is permanent and inviolable. Witness:

This song of mine is more soiled than the earth
older than the sun,
for several births I have had to live
with the weight of its words.

The psychologist Steven Pinker in The Blank Slate, his path-breaking book that explores the nurture versus nature debate expounds that human beings are not born ‘clean’. Instead our genetic baggage is a large determinant of the lives we lead. It might be new to the world of science but intuitively ‘genetic baggage’ is something writers have tussled with as part of their trade. What a writer writes springs from who they inherently are. It’s as simple as that. Of course, how a writer then leverages that raw material is entirely determined by the individual, but the wellspring, the fountain is all within.

Over my decade-long writing career the veracity of that has come to me, often. When I completed the manuscript of my first novel (published second), The Long Walk Home, the writing of which took me seven years, the theme of the book finally became apparent to me. It is a historical novel that uses 20th-century Punjab to tell the story of the life of one man, a layering of the epic with the intimate. The book explores how a man’s life is inextricably linked with the coordinates of his birth: place, family, religion, caste. In the prologue to the novel, which details the protagonist Harbaksh Singh Bhalla, is a passage as follows:

He died in the same town he was born, just short of his seventy-first birthday.

One could say that Harbaksh Singh Bhalla had not travelled far in life, literally and figuratively. A lifetime in one place can imply many things: a lack of wanderlust, an inordinate attachment to one’s roots, risk-aversion. Or inferences more practical can be made: lack of opportunity, ancestral property, family matters. Then there exist tenuous notions like the air of a place and how the spirit resonates to it, the smell of the earth and its connection with something deep and primitive within us, the songs of home and their dance in our veins.

It could well be a concoction of all the above – a heady mix of conflicting elements that gives rise to an equation at once complex and elementary. But equations, however tortuous, can never sum up a person. The best way to know a man may still be the only way: to walk in his shoes and live his life.
Genetic baggage can, and does, trip the best-laid plans and the noblest intentions. Welcome, Mr. Pinker, to our world! And while you are at it, listen to Jagjit Singh’s soulful rendition of ‘Eh mera geet’ or Nusrat Fateh Ali Khan’s haunting ‘Maye ni maye’. You might not understand the lyrics but the poetry will seep into you.

For those of you looking for a more contemporary rendition of Batalvi check ‘Ik kudi jeeda naam mohabbat’ from Rabbi or ‘Aj din chadya tere rang warga’ from the film Love Aaj Kal.

Posted by Manreet Sodhi Someshwar at 10:00