War Horse, and How an Unlikely Story is Born 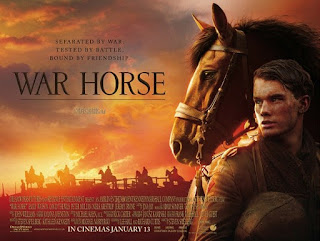 Last Friday my daughter and I watched War Horse. War Horse is a film adaptation of the beloved children’s classic by Michael Morpurgo. The novel was published in 1982 and has since been the subject of a successful stage adaptation, a radio adaptation broadcast on BBC and recently Steven Spielberg gave it its Hollywood makeover.
My husband was travelling - which was convenient since, while he has nothing against animals, he probably wouldn’t devote 146 mins of his life watching a film with an equine hero. M and I were more than content to do just that. Let’s just say we have a thing for animals, which that lovely hymn captures well:
All things bright and beautiful,
All creatures great and small,
All things wise and wonderful, The Lord God made them all.
Besides, M has been horse riding for close to four years now and the best part of it for her is that she gets to talk to the animals, feed them and gaze with adoring eyes as they pick a carrot cube with slobbery lips or knock the ground with impatient hoofs or prick their ears as they listen.
What I have learnt is that each horse is different - not just in looks but in temperament - and, if you spend time in their company, you learn to converse with them.
Set at the outbreak of World War I, War Horse is the story of Joey, young Albert’s horse, who is bought by the British cavalry and sent off to France to fight while a distraught Albert, too young to enlist in the army, is left behind. However, when Albert gets the news that Joey’s rider, Captain Nicholls was killed in battle, he embarks on a mission to locate Joey and bring him home.
War Horse, the novel, is a war story that highlights the tribulations of war - the heart of the story, however, is the bond between man and animal. It is this heart that Spielberg has taken and and embellished in his film.
If you’ve never loved an animal like a dear dear friend, then this movie is not for you - your money might be better spent on Clooney in Hawaiin shirts facing midlife crisis, or Brad and baseball or on the lovely ladies in The Help. But if you’ve gazed into an animal’s eyes and sensed a kinship, why then, Joey will take you on a life-affirming journey in the dark as you watch him gallop through gunfire, lug a machine gun uphill through slush, and escape his captors, only to race into a no man’s land where he gets entangled into barbed wire while on either side stand British and German soldiers with their guns ready - will Joey survive?
I am not a film critic but what follows is perhaps one of Spielberg’s finest scenes. A British soldier, defying his superior, approaches Joey with a white flag hoisted in one hand and reaches the trapped horse. As he wonders how to free Joey he senses a figure towering behind him: a German soldier with something menacing gripped in his hand. You’ll need this, the German says, and extends his hand which holds a wire-cutter.
In a scene that is reminiscent of Saving private Ryan, another worthy feat from Spielberg, two enemies suspend their hostilities and work in tandem to free a struggling animal. The poignant scene is leavened with humour and Spielberg makes you want to jump out of your seat, throw your arms around the two men and Joey and declare: let’s stop the fighting, shall we?
Well, what more can I say? Joey, who acts better than several heroes, especially in Bollywood, is played through the film by fourteen horses but is mainly essayed by a horse called Finders Key. Hats off to him.
David Thewlis - whom M and I know better as Remus Lupin, of Harry Potter fame - plays a slimy landlord, and Michael Morpurgo, the writer, features fleetingly in a horse auction scene standing next to the landlord at the movie’s beginning. And finally, a word on Michael Morpurgo himself. He was the third Children’s Laureate, a position awarded in the UK once every two years to a distinguished writer of children’s books. He runs a charity called Farms for City Children where inner city children live and work on rural farms. He tells a very interesting story about a boy who came to the farm and hardly spoke - his teachers warned Morpurgo not to question him as he was a stammerer and would flee in terror.
Morpurgo followed the instructions and observed that the boy related wonderfully with animals but never spoke to other children or adults. And then, one evening, Morpurgo chanced upon the boy standing by a stable door and talking to a horse. “Talking, talking, talking to the horse. And the horse - Hebe - had her head out, just over the top of the stable, and she was listening... and I knew this was a two way thing”.
Something about the intimacy that Morpurgo witnessed that day between the boy and the horse made Morpurgo believe that he could tell a story about WWI through a horse. And thus was War Horse born.
Posted by Manreet Sodhi Someshwar at 12:17